Round Four of the Singapore Rok Cup 2015 series took part just two weeks after Round Three on 11th July 2015 at the KF1 Karting Circuit.  This would be Kai’s third race weekend in a row, having won the X30 Challenge Round Two the weekend before, which was run in the counter-clockwise direction, this round of Rok Cup run in the clockwise direction.

This was to be the final round of the Singapore Rok Cup 2015, Kai was in fifth place with 144 points after disappointing early rounds.  The best case scenario for Kai was fourth place in the championship, to do so he would need at least four more points than his RMC team mate  Putera Adam.

Being a pooled engine series the engine draw took place on Thursday and Kai got his first chance to test his race engine on Friday.  Thankfully unlike previous rounds it seemed that his randomly selected engine was good and he managed to top several of the practice session time sheets with lap times as quick as 51.5 seconds (in previous rounds we have been over a second off the practice pace), by the end of the day all drivers were with one second of the best times.  As expected Kai’s good friend Alex Kattoulas wasn’t far behind, with typical just hundreds or few thousands of a second difference.

The Rok Cup race day doesn’t begin until 12 pm (drivers briefing), the MiniRok warm-up was at 12.45 pm, Kai placed second, two-tenths off Alex.  Qualifying was an hour later at 1.55 pm, Kai was quick from the outset, topping the time sheet right until the very last lap when Alex just managed to squeeze ahead by a paper-thin 3/1000th of a second.  Both Kai and Alex were 0.17 sec clear of the next fastest (Dylan Bondi) with a very tight 0.9 seconds covering the top 14 drivers.

Qualifying second Kai started on the “less preferable” right side of the grid for the ten lap pre-final race, in the first corner he was passed by the always competitive Ryan Chapman.  Kai stayed close and managed to pass Ryan on lap five, then spent the next couple of laps closing the gap to Alex (and in the process setting the fastest lap time of the race), he passed Alex on lap seven to finish first for a valuable 50 points towards the overall result. 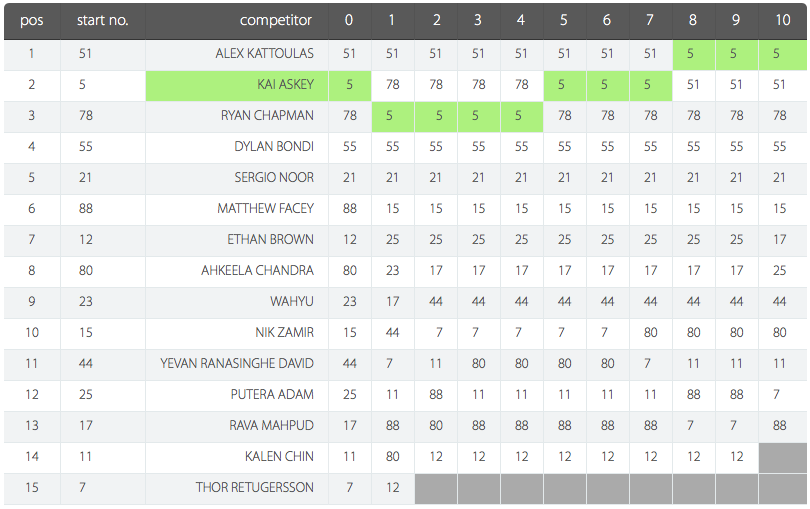 Buoyed by his excellent pre-final drive Kai was in good spirits on the grid for the Final, starting on pole he would have the inside line into the first corner and was confident he had the pace to maintain the lead.

That’s pretty much exactly what happened, a good start and first through the first corner, he was followed closely by Alex for the entire race who kept pressuring Kai and attempted to pass a couple of times but he knew that to win the championship he couldn’t risk not finishing.  Kai won the final and took an additional 60 points, giving him the overall win for the round and fourth place in the championship (a great result considering his 4th, 8th and 6th in the first three rounds).  Four race wins and two “round” wins in two weekends, Kai’s confidence at an all time high and very proud and happy parents and team.

Thanks to Matthew Lau for some of the photos.