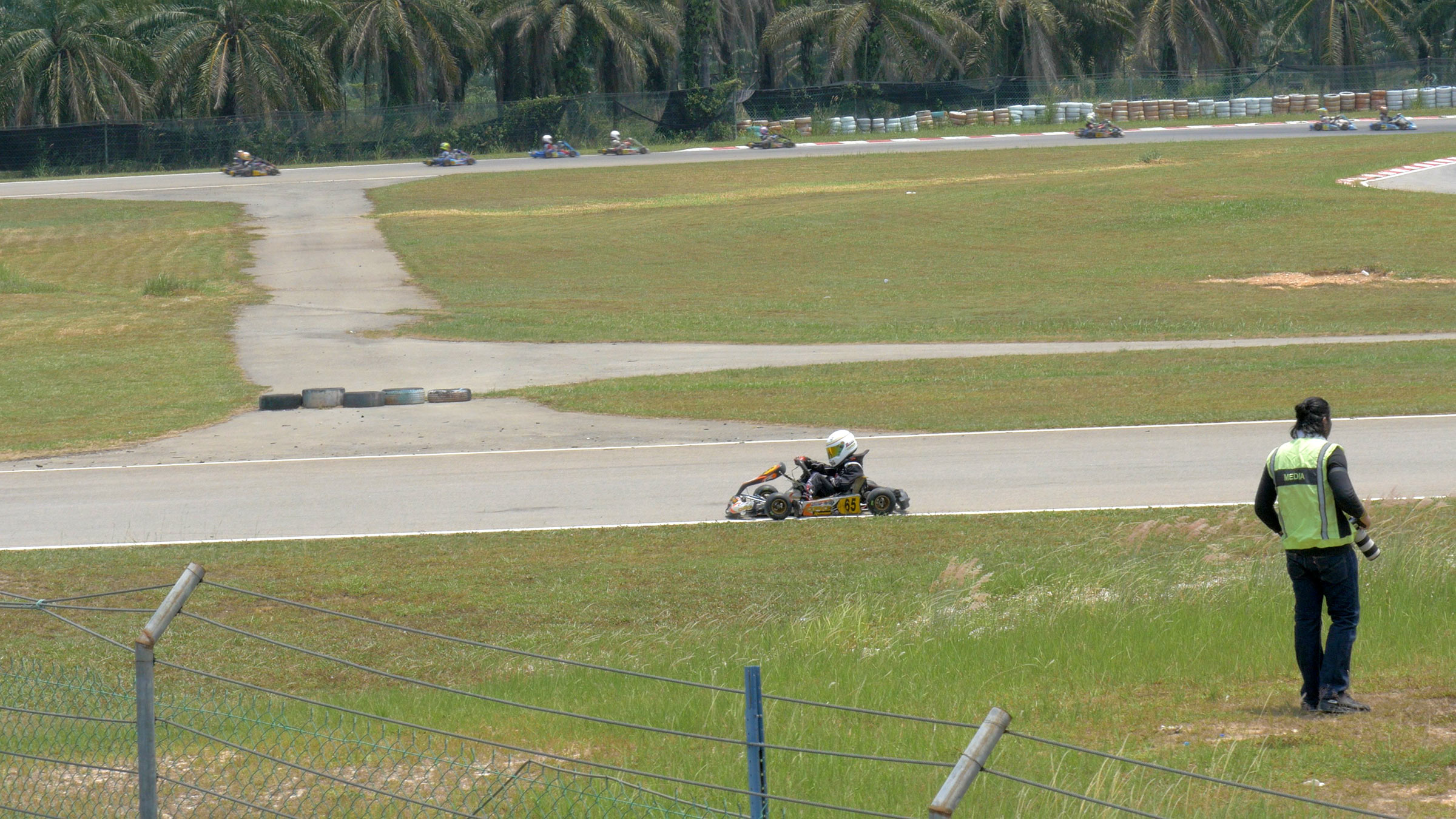 Preparation began on Thursday with up to six practice sessions per category, in the morning Kai quickly got back up to speed posting fastest laps on par with his teammates and the rest of the field.  It’s fair to say that while we’re used to hot weather at Sepang this weekend was shaping up to be one of the hottest we’ve had (peaking at 38°C in the shade), this also had a significant impact on the track and kart performance, with lap times slower in the hot early afternoon.  Friday was more of the same, fine tuning the karts, confirming and settling on a race setup.

Saturday consists of two morning warm-up sessions, a “time trial” (qualifying) and two heat races.  Practice went well, Kai went 7th fastest with a 55.5 sec lap, but as with previous RMC races Kai couldn’t hit a sub-56 second lap in qualifying, his 56.235 sec fastest lap placed him 13th, just 3/100ths sec behind his friend and fellow Singapore driver Alex Kattoulas.  As usual the top four karts (from Prodigy and TKM Racing) were significantly faster than the rest of the field. 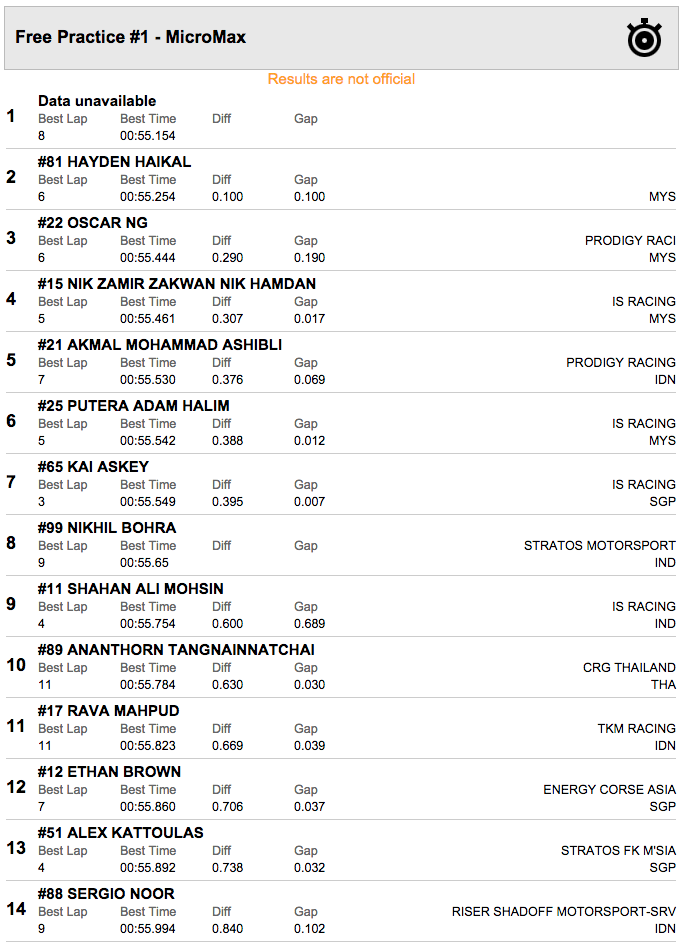 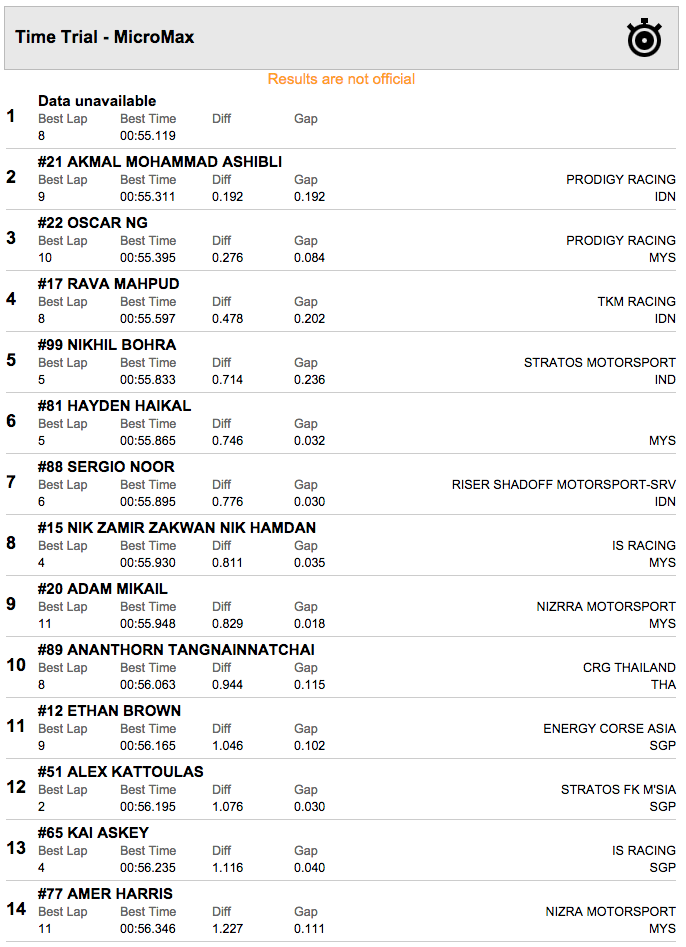 The heat races start in qualifying order, Kai was on the 7th row in 13th place, we still weren’t sure of the pace of the karts.  In heat one he slipped to 15th at the first corner but fought to make his way back up to 11th before being passed on the penultimate lap to finish 12th.  In heat two he battled with his teammate Shahan and eventually finished 14th.  The result of the heats meant he would start in 13th for the pre-final race on Sunday morning.

Kai arrived on Sunday determined to make up as many places as possible, the team had been working hard to tune the kart better for the extremely hot conditions and this showed in the pre-final as Kai managed to climb up from his starting position of 13th to 8th by lap 8, however a small mistake on the next lap saw him passed by two competitors and he finished 10th, which is where he would start for the final.

Sadly for Kai this was the Final that wasn’t meant to be, the karts rolled away from the grid at 1.10 pm, took one warm-up lap and one formation lap.  The start was good with no incidents at turn one and Kai held his position, just as he turned into the turn two he was hit from behind by another driver which then pushed him sideways into yet another, the combination of the force of the impact and the sideways load caused his chain to jump off the rear sprocket and Kai rolled to a halt at the side of the track, not even one lap covered.  He climbed out and made the slow walk back to the pits, extremely disappointed.  Even more so because he said that the kart had felt better on the warm-up lap than in the previous race and he thought he should have been able to make up quite a few places.  This seems likely as Kai’s teammates Nik and Shahan both made up several places finishing 8th and 6th respectively, Putera managed a great 3rd place, a good overall result for the team (three drivers in the top 10).

Kai’s pre-final finish and consolation points considered he earned a total of 51 points from the round dropping him from 10th to 14th in the championship.