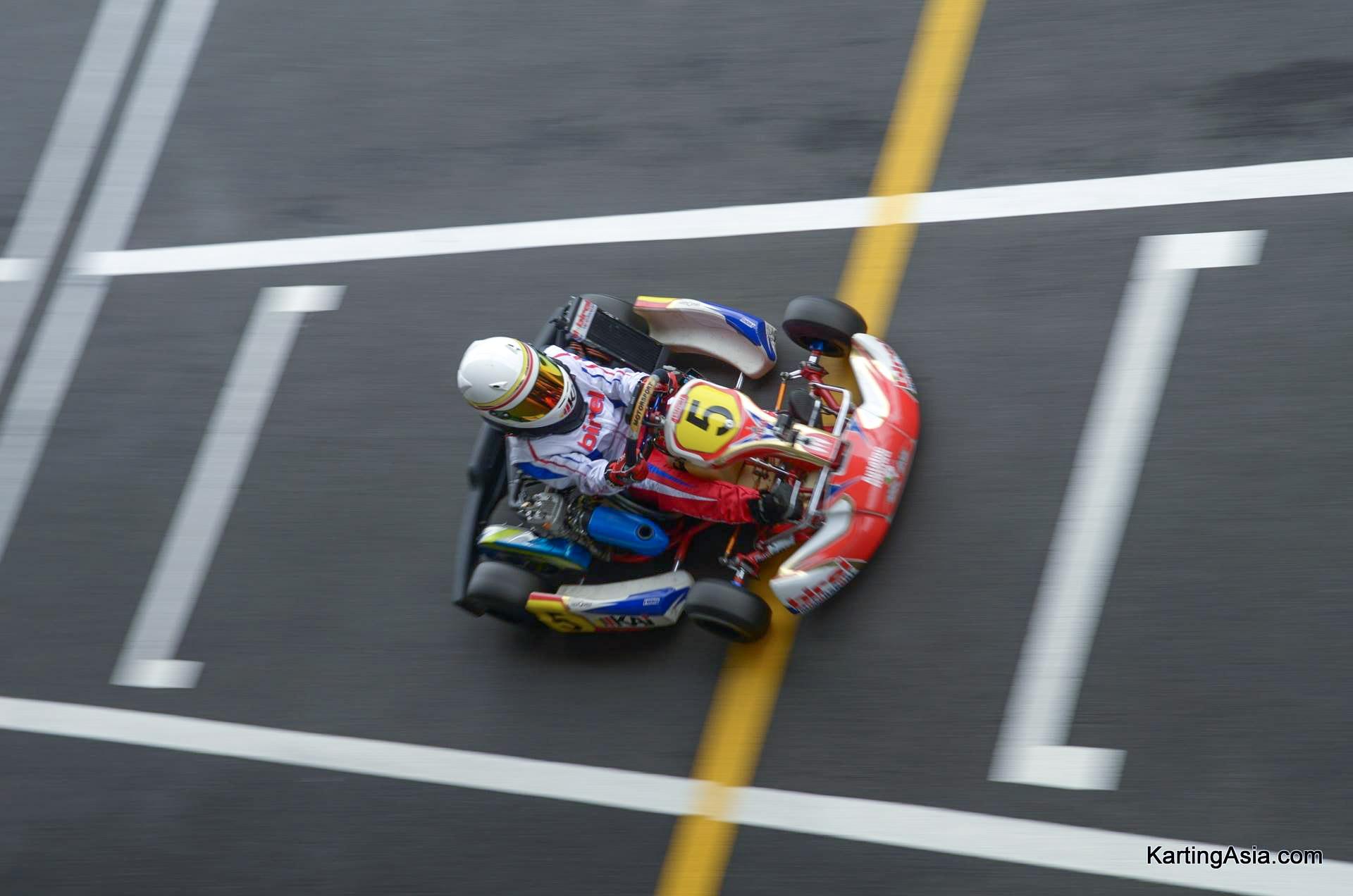 The second round of the IAME X30 Challenge Singapore took place on 3rd & 4th July 2015 (practice day one, race day two).  This would be the first round of the X30 Challenge to utilise the new IAME X30 Rookie engine pool, moving on from the custom (and often modified) Vortex MiniRok engines used in the last X30 round.  The X30 Rookie is a compact 60 cc water-cooled engine producing about 10 horsepower (roughly the same output as a stock Vortex MiniRok).

Official practice took place on the day before the race and right from the outset Kai was quick, topping the time sheet from the first session and continuing to do so for the rest of the day in all but one session, encouraging though for everyone was that by the last session there was just 0.7 seconds covering the top 12 drivers best lap times, validating the X30 Rookie as delivering very equal performance from one unit to the next. 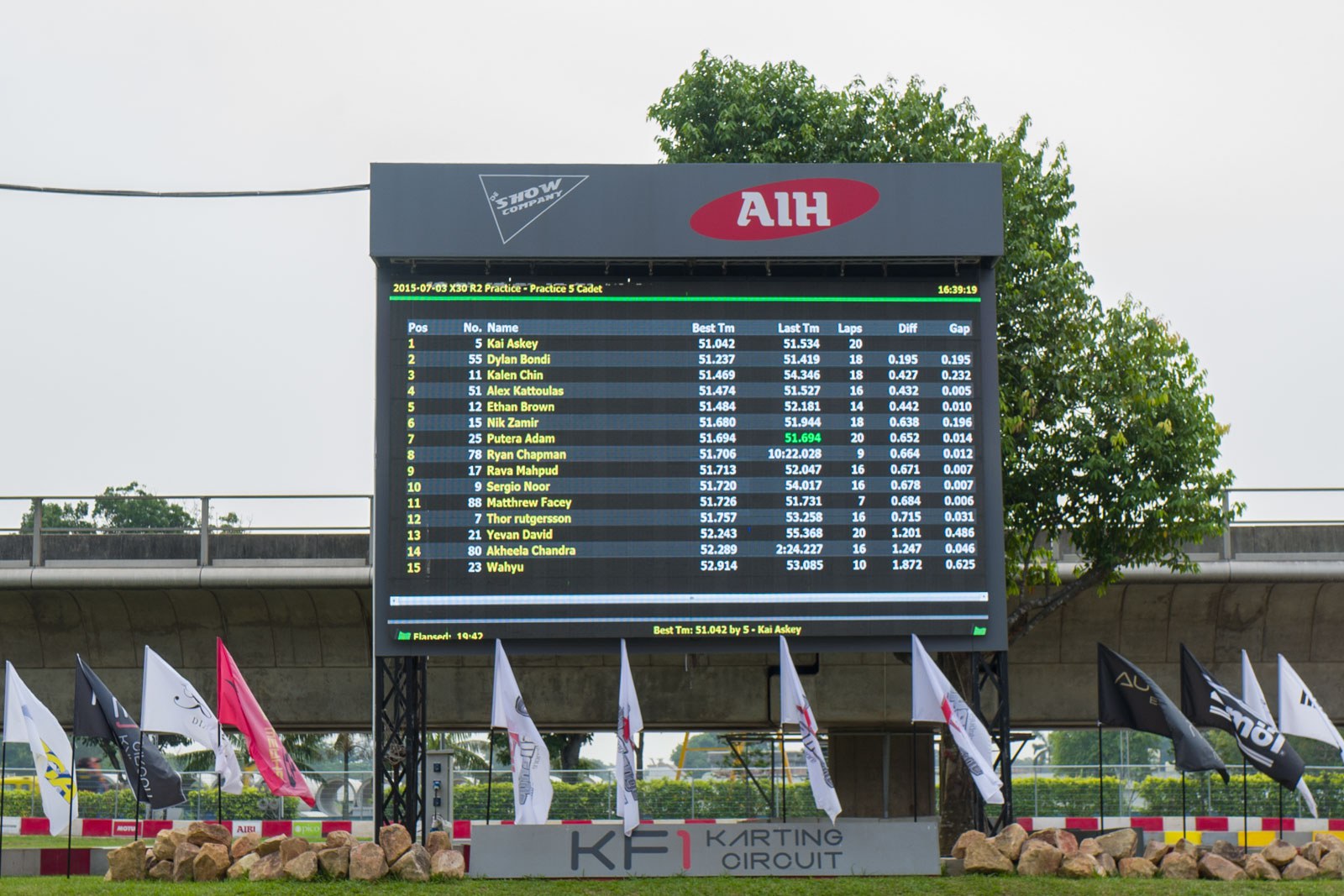 We awoke on Saturday morning to the kind of dark skies and heavy monsoon rainfall you only find in this part of the world, luckily the rain had stopped before the start of the first practice session, but it meant that the practice, and later qualifying would both be on a wet track.  Practice went as well as we expected, the track was still wet and in anticipation of it drying soon we didn’t make any settings changes to Kai’s kart, he finished the short eight minute practice in seventh place.  Qualifying took place just under an hour later at 11 am, but with over 70 karts due to go out for their practice we gambled that while still damp the track would be starting to dry in places.  Qualifying came and the gamble paid off, the slippery track delivered lap times some five seconds slower than on Friday but Kai managed to go quick enough to earn second on the grid behind the always fast Ryan Chapman.

Race One took place at 1.20 pm, Kai was feeling comfortable with his kart and confident of a good result.  The front row of Ryan and Kai made a solid start, avoiding any first corner issues and pulling away from the chasing pack building a fairly safe two second gap, on lap four Kai managed to pass Ryan and despite being followed closely by him for the rest of the race crossed the finish line in first place.  Valuable points and also a pole position start for the next race. 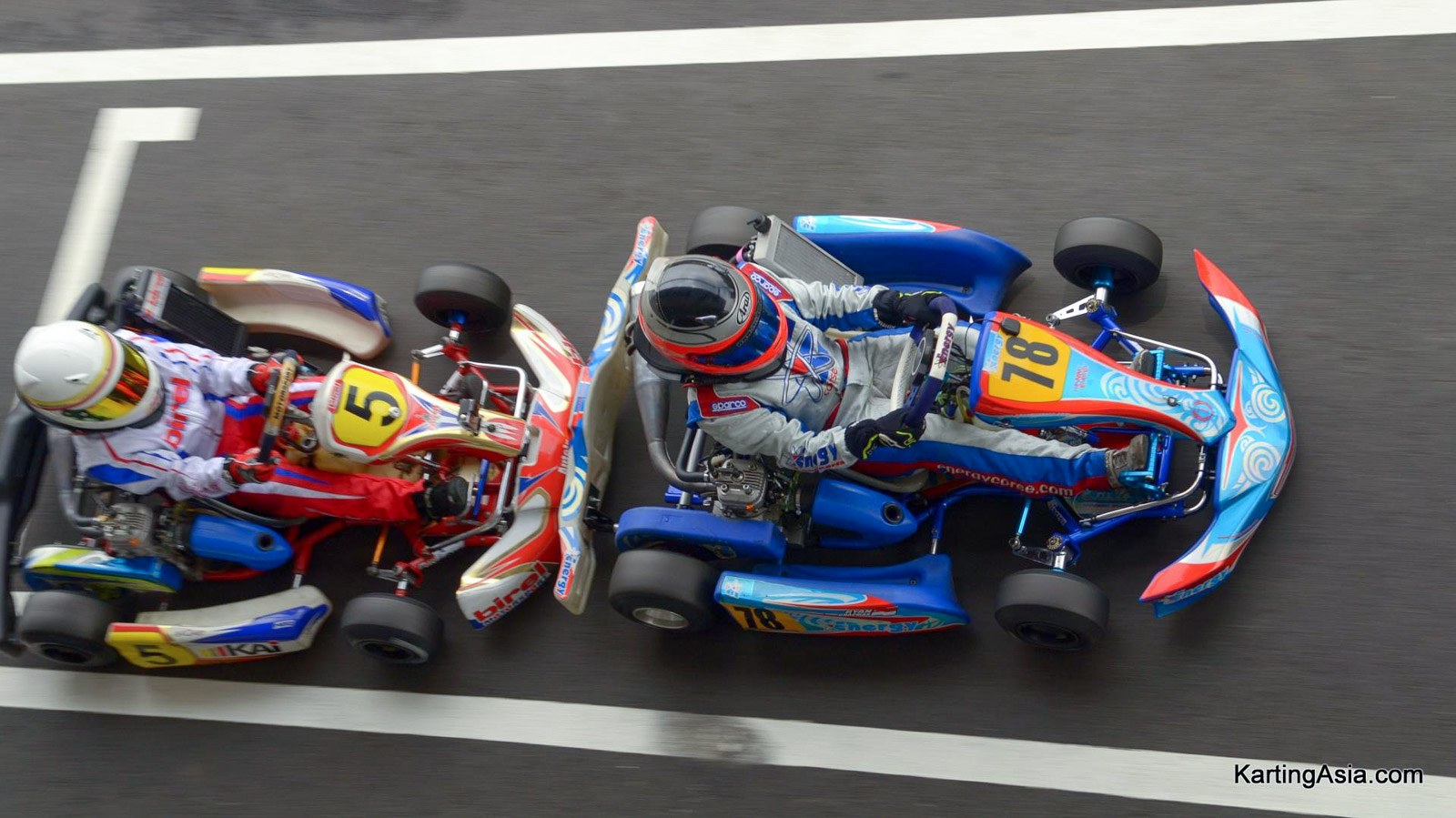 The twelve lap Race Two at 3.30 pm saw another good start by Kai, closely followed by third place Ethan Brown, into turn one they both made it safely around, more than can be said of the chasing pack who got tangled up in each other and there were quite some changes of position in that brief moment.  Kai and Ethan built a good gap from the chasing pack, then Kai dug in with a series of fastest laps to pull away from Ethan and build up a safe four second gap, which he would keep all the way to the finish line.

After the various engine and kart setup problems of previous races it was a sweet victory for Kai, he drove intelligently and consistently throughout the weekend and despite pressure from other quick drivers maintained his composure to take the win.  He also earned a valuable 45 championship points moving him to first place in the cadet championship.

Thanks to Mikko Nässi at KartingAsia.com for some of the photos.