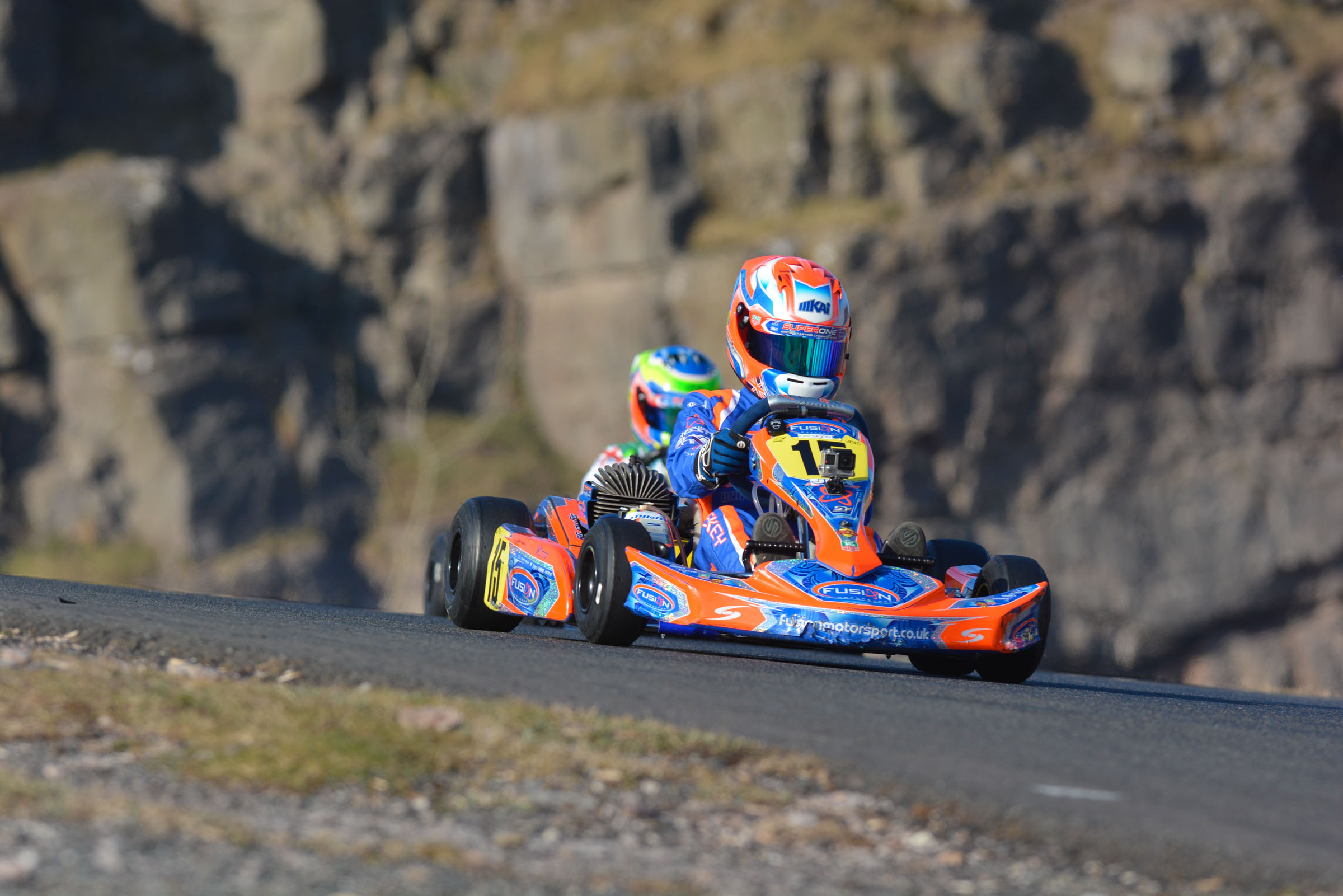 The first round of the 2016 Super One British Karting Championship took place on the 19th and 20th of March at the Rowrah Karting Circuit in Cumbria.  This was the second weekend in a row at Rowrah for Kai having competed in the Super One ‘O Plate’ the previous weekend where he finished a respectable 13th.  This weekend would be a different challenge though, against the top 40 drivers in the UK racing for valuable championship points things were considerably more serious.

Saturday was made up of a timed qualifying  followed by two heat races which would define the grid for the pre-final and final races on Sunday.  The drivers were divided into two groups, Kai was in the second group, his qualifying began at 11:30, in a short seven laps he posted a best time of 55.49 sec which was good enough for sixth in group and 11th overall. 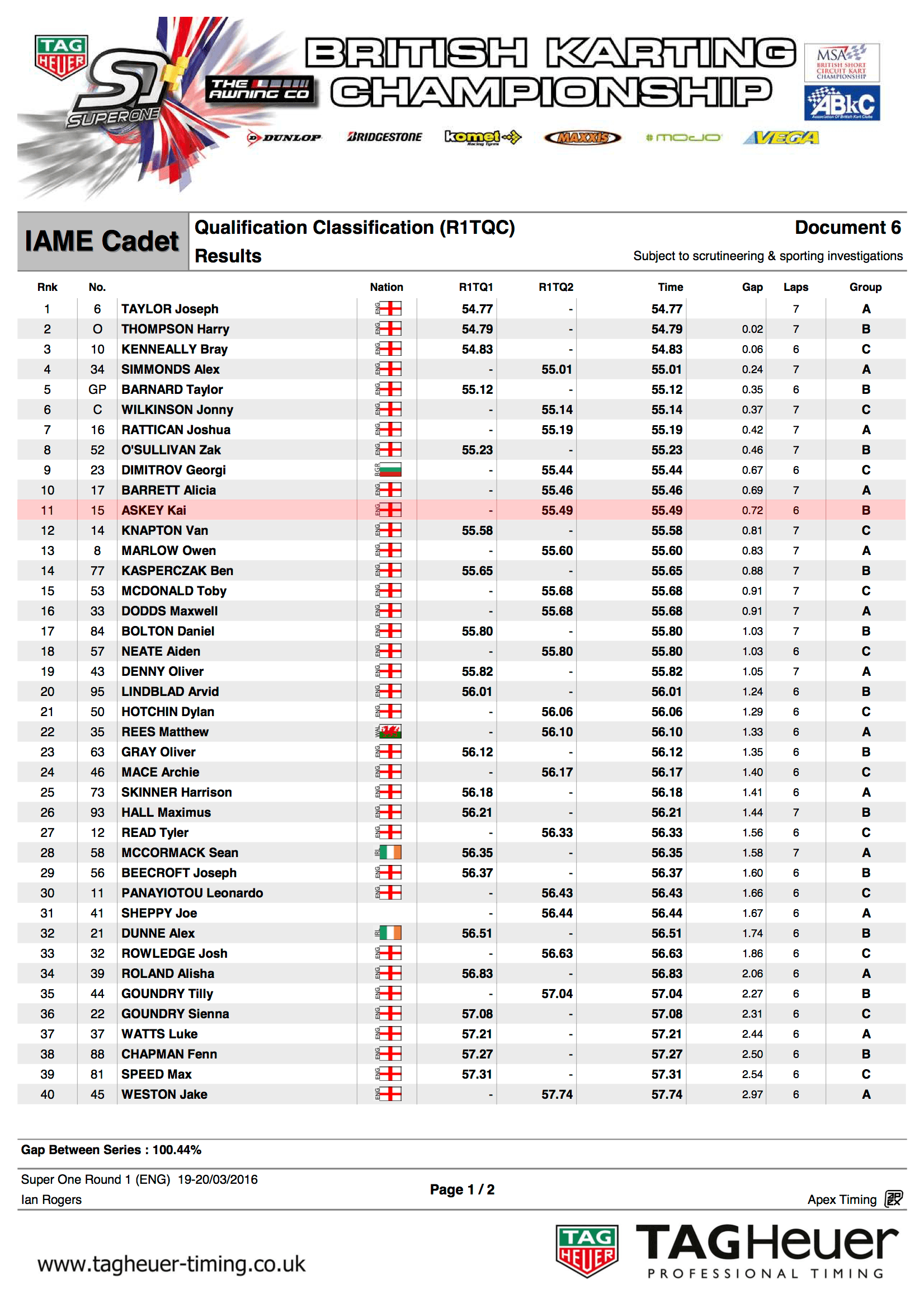 Previous Super One races at Rowrah have featured a ‘standing start’ (starting from a standstill on the grid) but this year rolling starts were used and this lead to some interesting first corner incidents.  Kai certainly fell fowl of this at the start of the first heat, loaded and spun sideways at the first corner he lost five places to 13th at the end of the first lap but pushed forward to 10th until on lap 8 he was hit hard from behind, spun around and dropped to 19th, Kai made up one place on the last lap to finish disappointed in 18th. 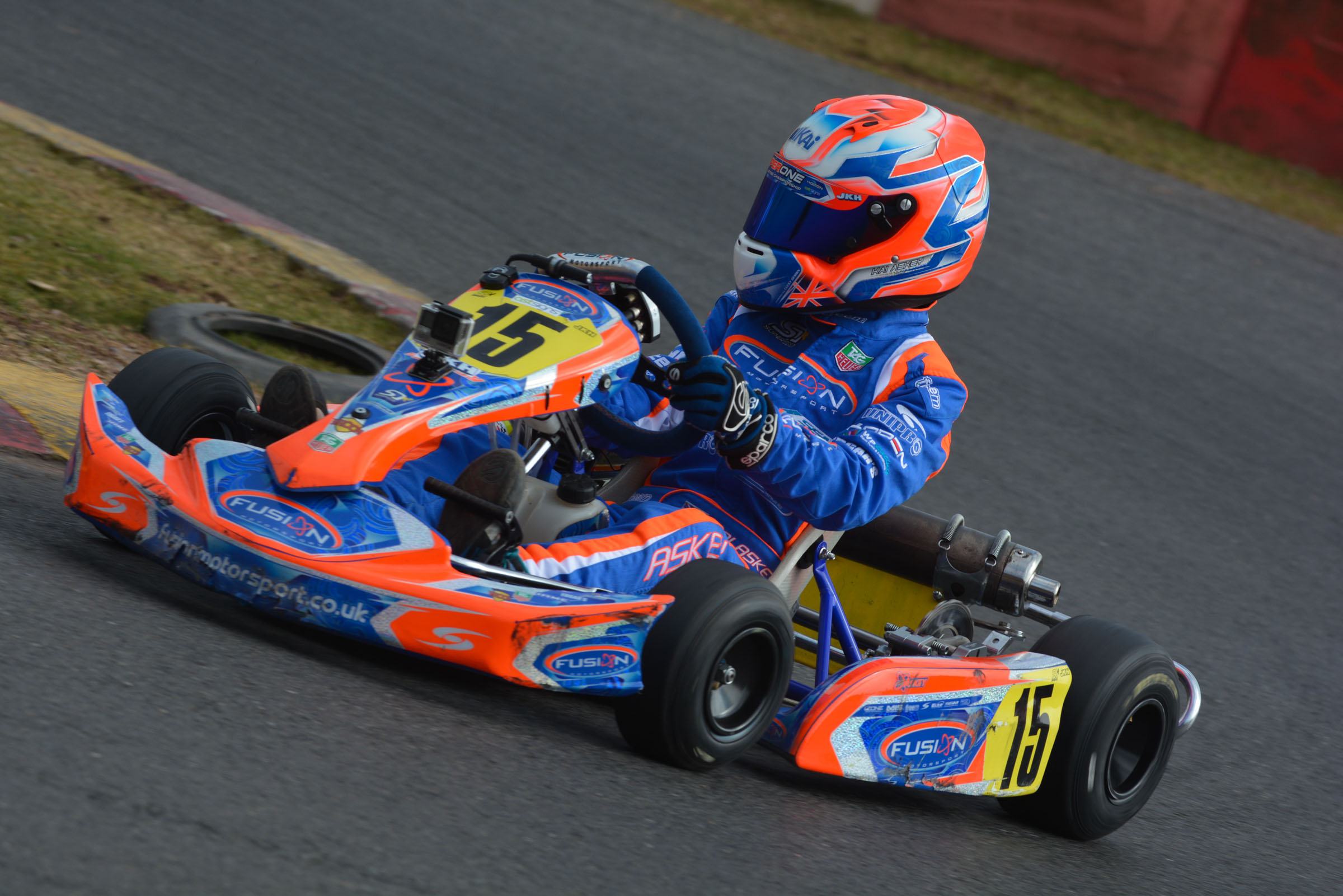 The second heat was a completely different story, his start was much better and he moved up from 7th to 6th on the first lap, finding his team mate Georgi Dimitrov the two worked together to push ahead to the front group, when the front three tangled Kai and Georgi moved ahead to lead the race on lap 7 but a last lap scramble saw Kai drop from 2nd to 5th, but still very happy with the result and some compensation for the first heat result. 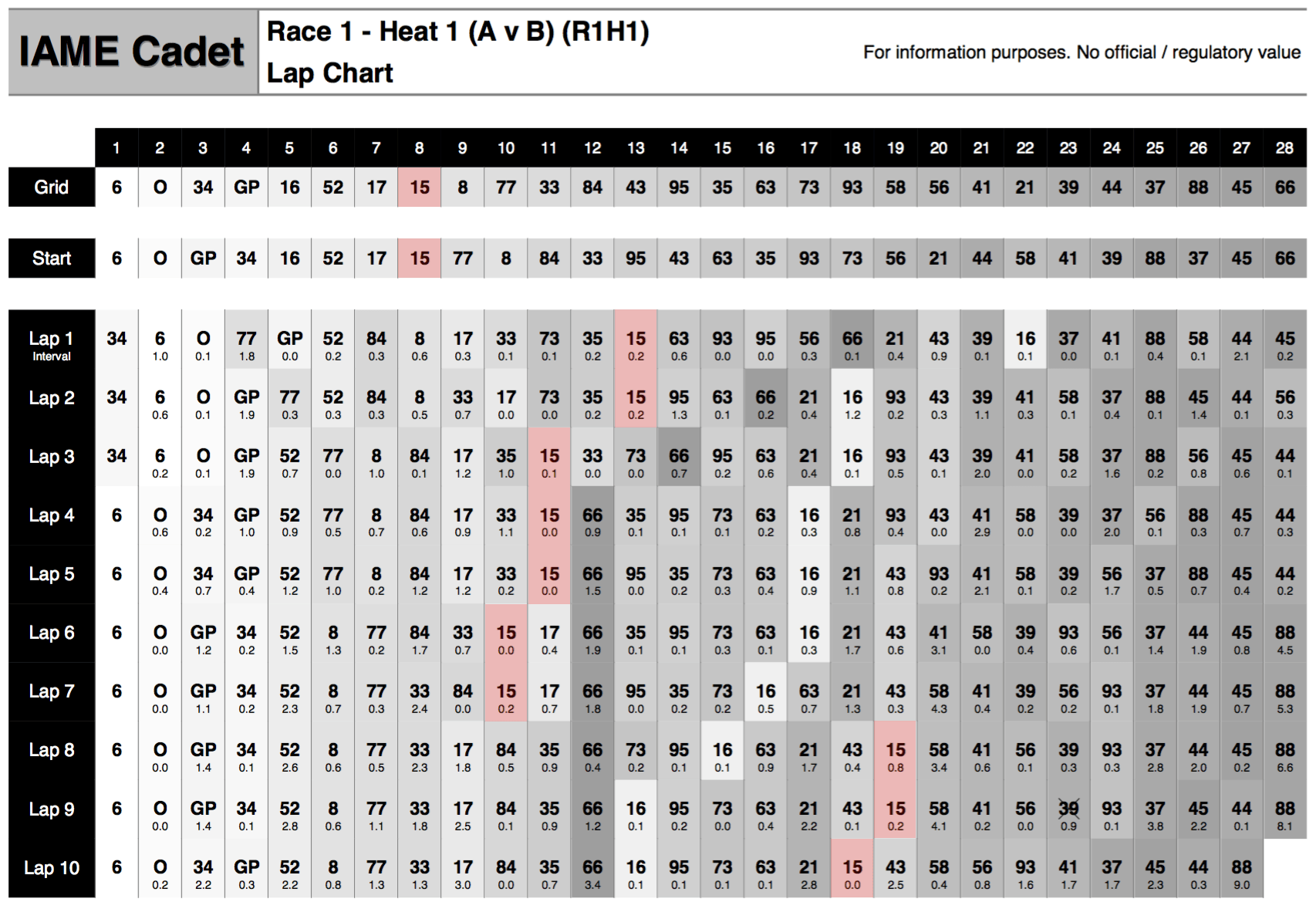 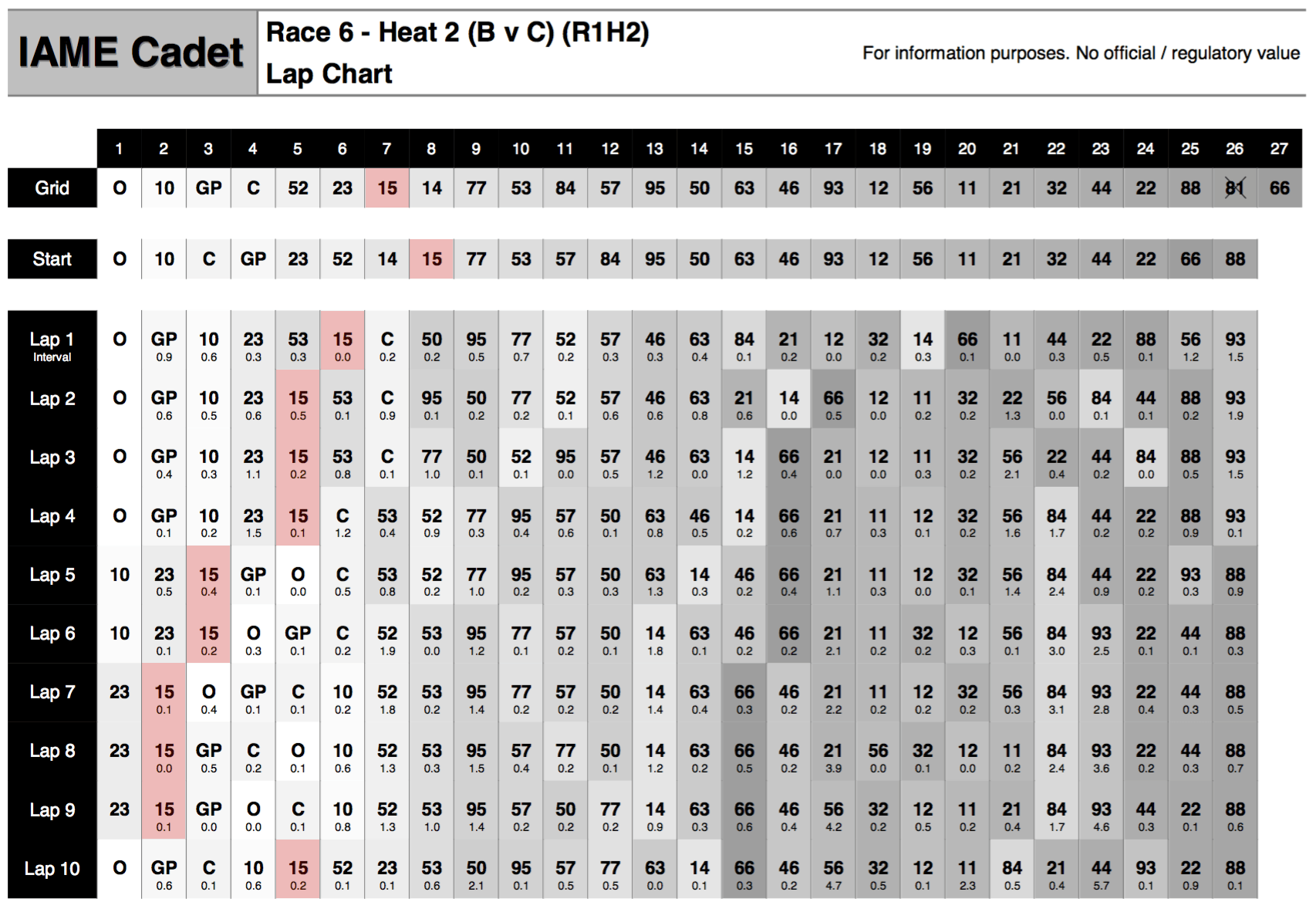 The 18th and 5th results from the heats the day before put Kai 14th on the grid for the pre-final (‘Final 1’) on Sunday.  This time the start didn’t go Kai’s way, he got pushed off on the exit of the first corner and had a little trip over the grass returning to the tarmac in 22nd place. From here he delivered an amazing comeback, charging at about 0.5 seconds a lap faster than those in front of him to make up eleven places to finish 11th (and almost side-by-side with his 10th place team mate).  He also recorded the third fastest lap of the pre-final, just 0.02 seconds off the fastest. 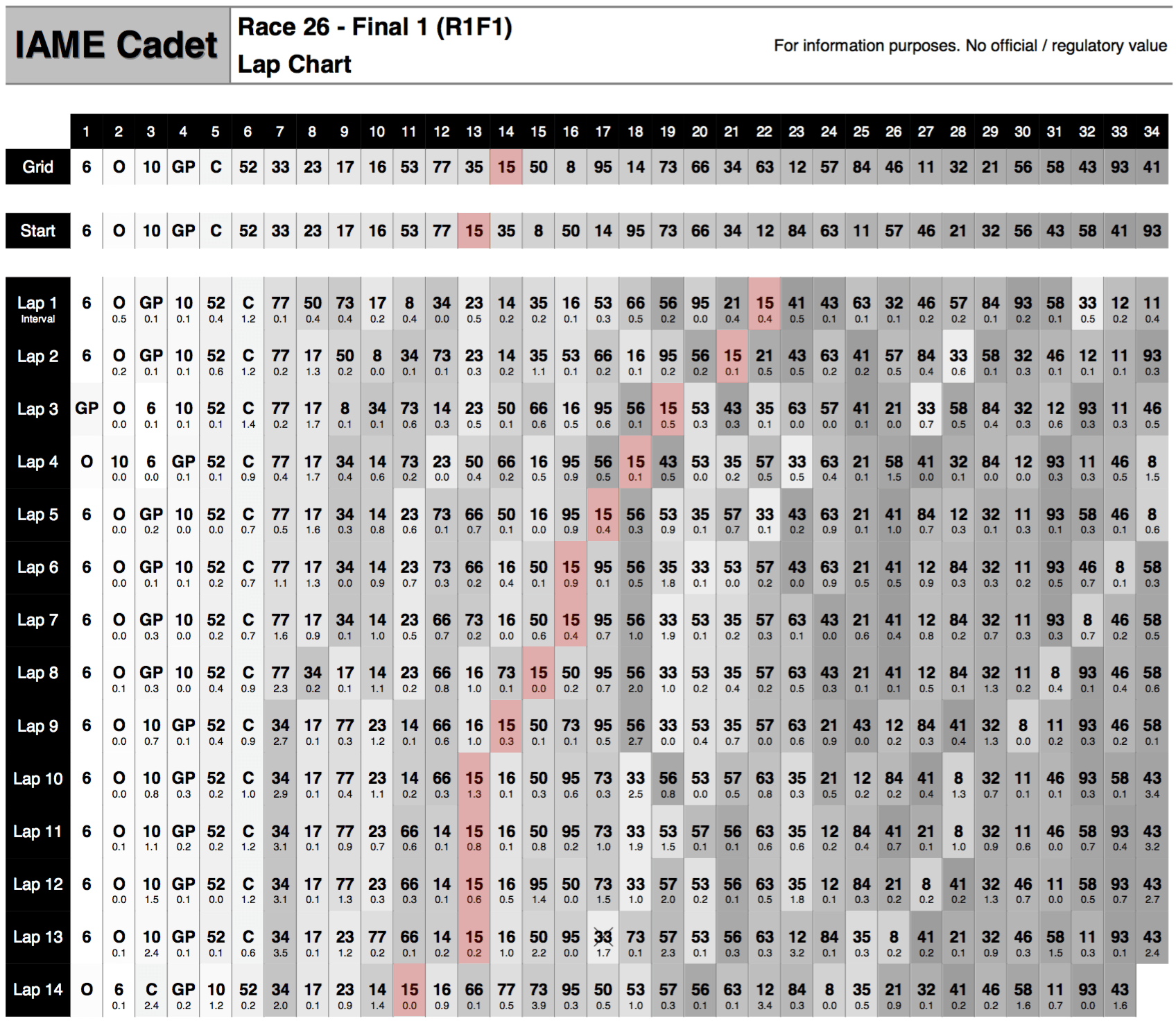 The final was extremely close, for a long time the top 10 drivers ran line astern as a single group, Kai was in 9th place for several laps, he dropped to 11th but was chasing back to get into the top ten when the race was stopped by a red-flag due to a nasty accident near the back of the grid (thankfully no injuries).  The race result was declared with only 10 laps run (the “75% rule”) so Kai’s final position was 11th.  He came back feeling mixed, happy with a good result (11th out of 40) but a little frustrated that he didn’t get the few more laps to finish even higher.  For his first British Championship race though it was a great result and we’re all looking forward to the rest of the Championship.  As usual many thanks to my mechanic / coach Joe Boullen, Dan Hazlewood, Neil Doran and the rest of the Fusion Motorsport team.