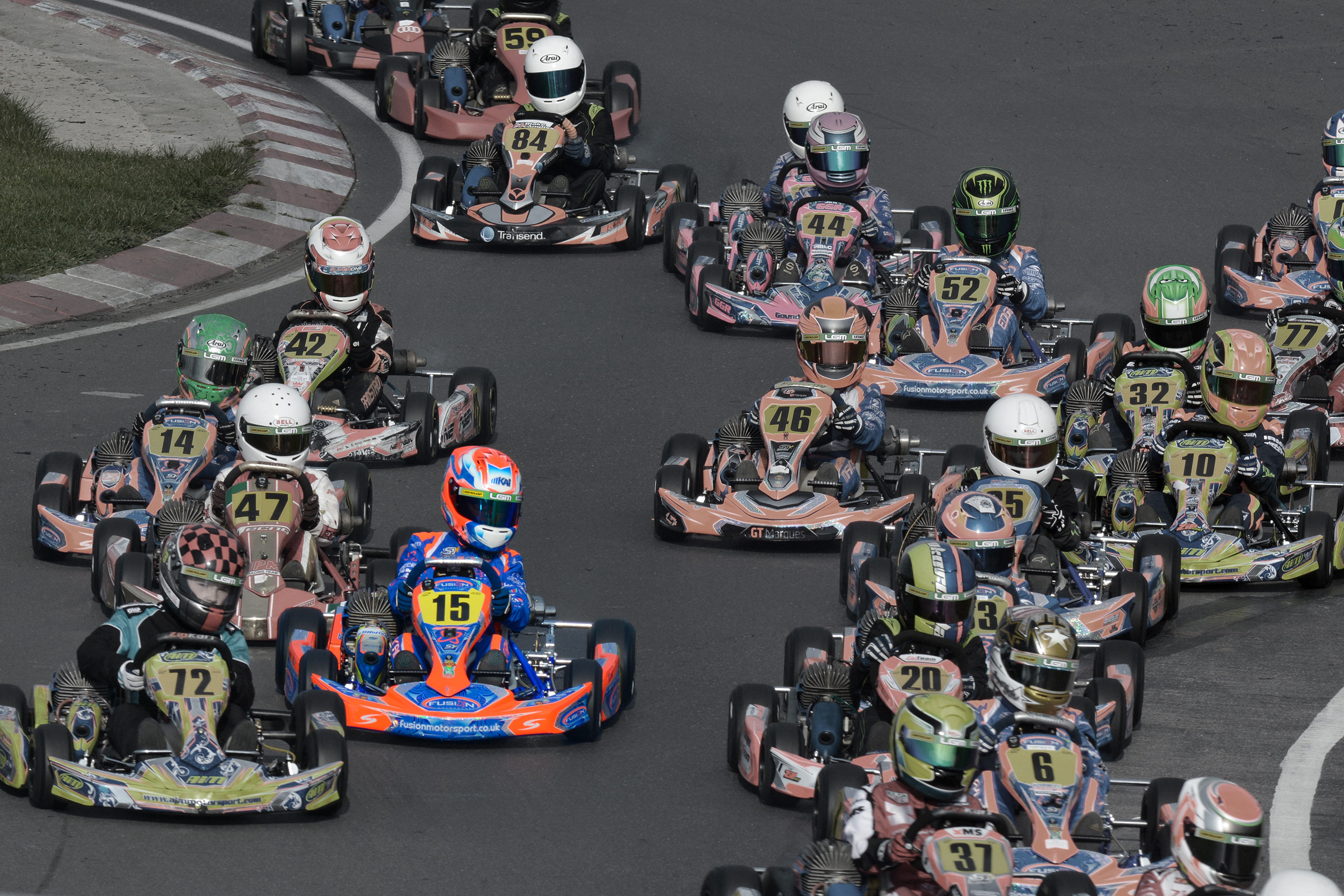 The Little Green Man (LGM) series was established in 2002 and runs in parallel with Super One, it is intended to be a more affordable and ‘school friendly’ with no practice allowed in the week before the race which take place only on Saturday and Sunday.  LGM always attracts large grids and can be raced on a “B” license (Super One requires an “A” license).  The opening round of LGM 2016 on the weekend of 2nd/3rd April at the awesome PF International circuit was no exception with over 40 drivers taking part in the IAME Cadet category, and over 200 drivers in total across all categories. 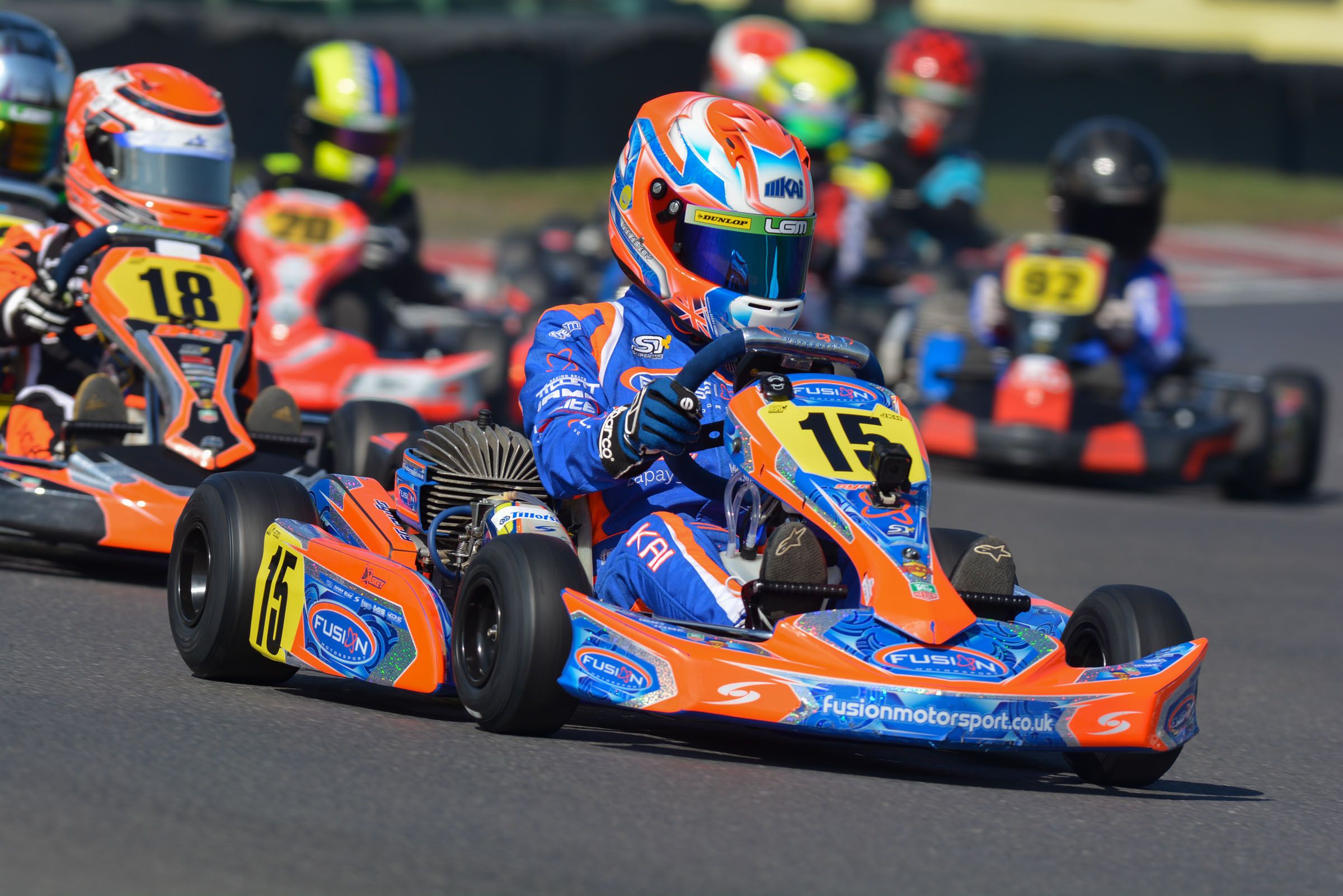 As with other series the 40 drivers were randomly split with each driver taking part in three of the four heats.  Kai was drawn to take part in heat one on Saturday and heats three and four on Sunday, starting grid positions for each heat were drawn randomly.

In heat one Kai went from 14th to cross the line in 10th, later promoted to 8th on penalties to other drivers.  In heat three Kai started 9th, made his way up to 4th with just two laps to go but got tangled in a charging pack and finished 10th, promoted to 9th later.  The last heat would be Kai’s biggest challenge, starting at the back of the grid in 30th he charged hard making up 18 places to finish 12th (and posting a 1:07.72  lap, just 0.06 sec off the fastest). 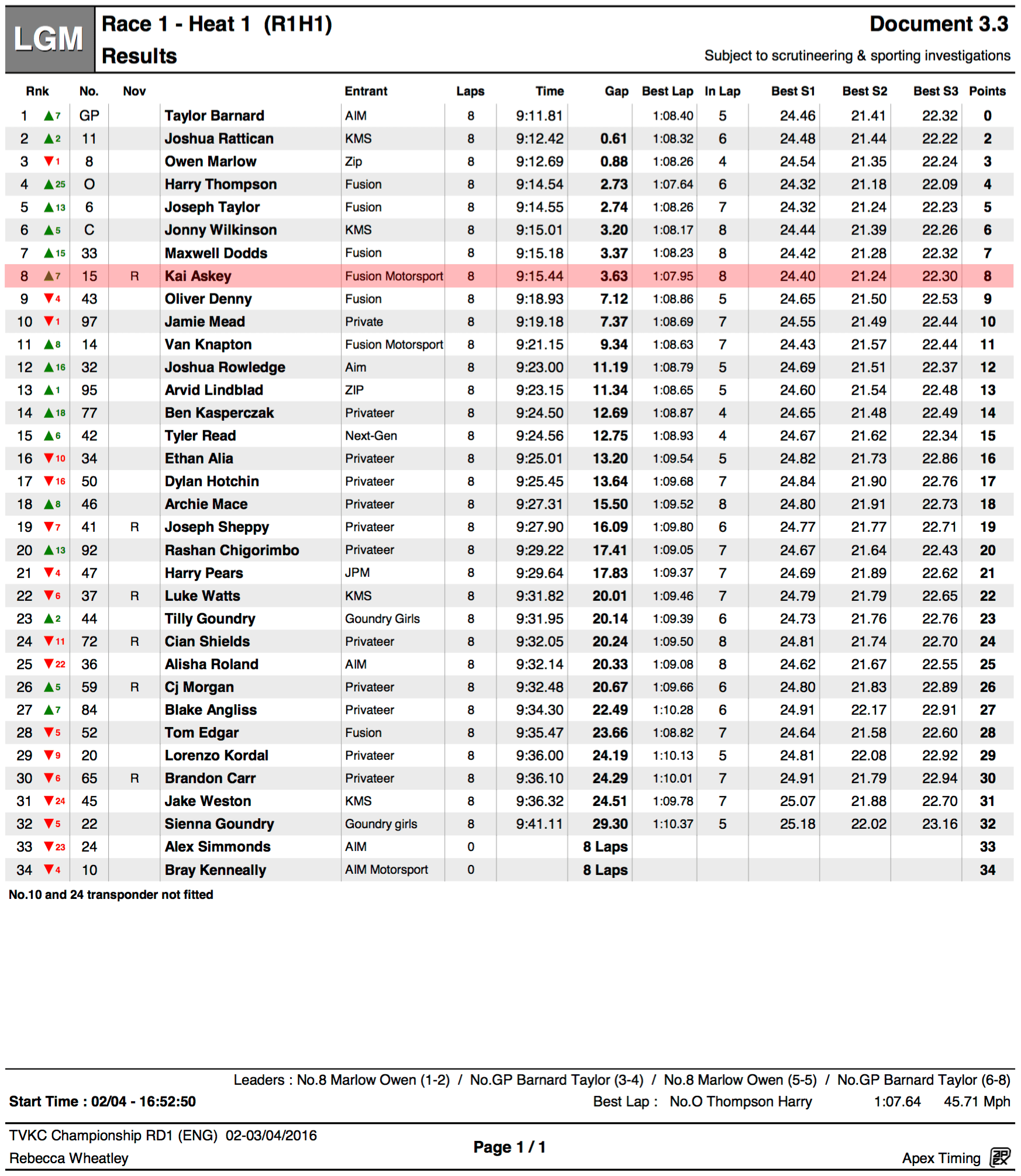 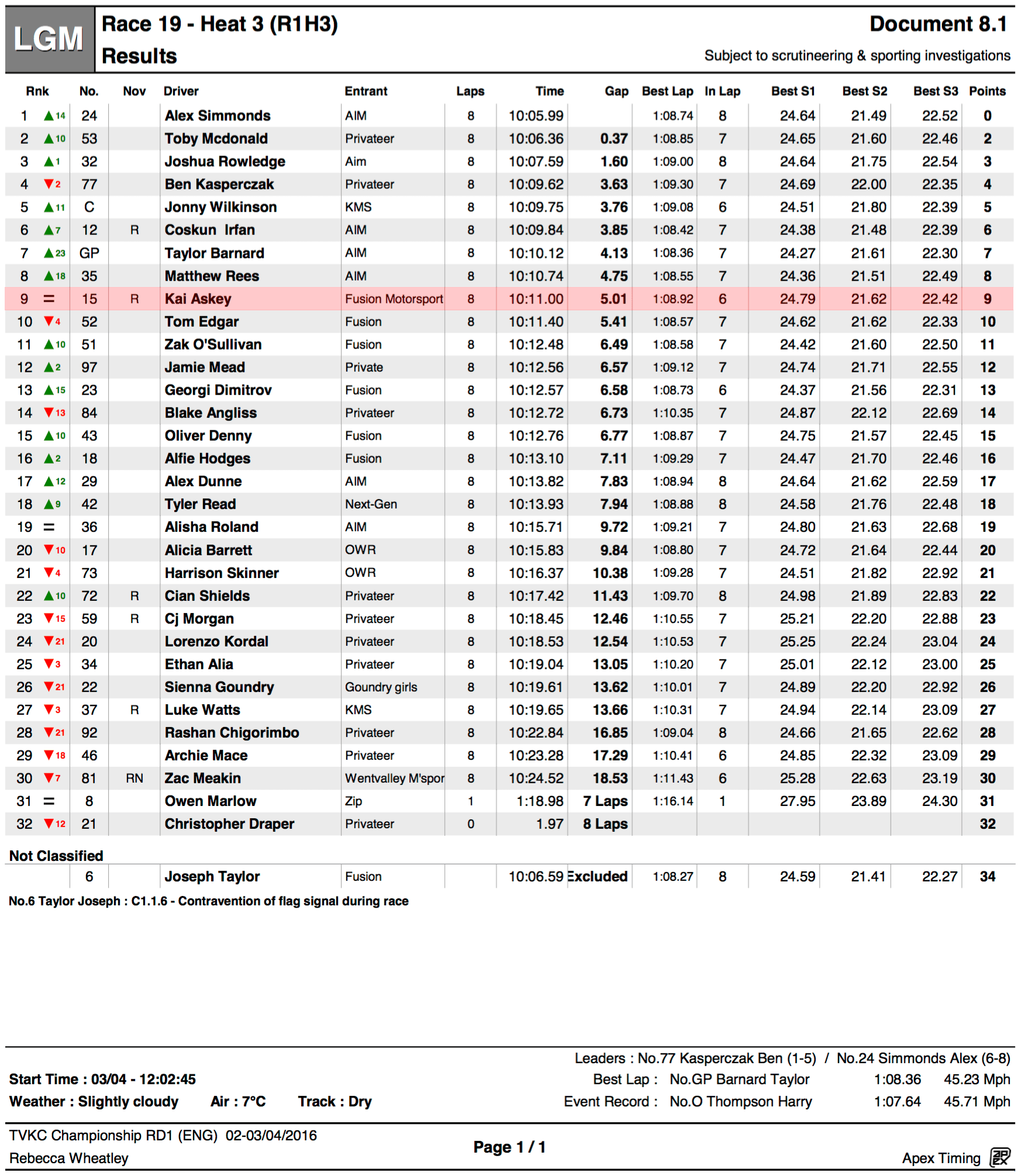 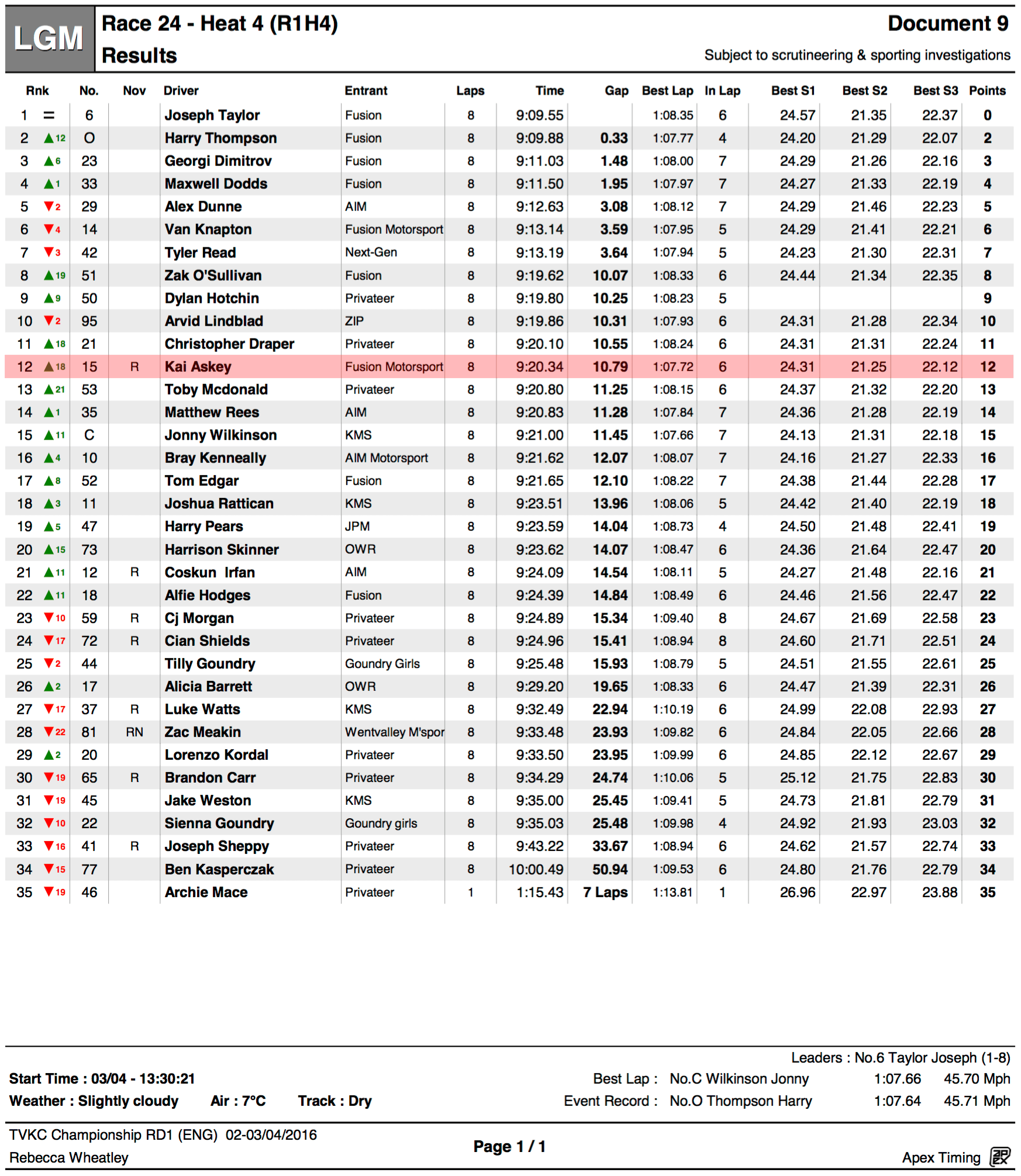 The combined points from Kai’s three heat results put him an astonishing 6th on the grid, he had the pace to keep it in the top ten but as a rookie (the highest placed rookie too) he lacked the experience, surrounded by the top drivers in the UK it would be difficult to hold on to that place.  He made a good start moving up to fifth at the first corner but more experienced racers from behind passed and he was 12th after the first lap, he lost more places on the next lap dropping to 16th but then dug in and climbed back up through the pack that had passed him eventually charging for the finish line with his teammate Zak O’Sullivan for 9th & 10th, Kai missing out by the slimmest of margins (0.02 sec).  He was also again right on the pace during the race, with a best lap of 1:07.51, the fastest lap of the race 1:07.48 by fourth place Joseph Taylor.

Despite losing some places in the final it was a fantastic result for Kai, 10th in his first ever LGM race and as a rookie, he got to take a trophy home and some valuable championship points.  Looking forward to the next!  As always many thanks to Joe Boullen, Dan Hazlewood, Neil Doran and the rest of the Fusion Motorsport team.  Some photos by Chris Walker of Kartpix.  Thanks to Karting Magazine for the ‘Special Mention’.