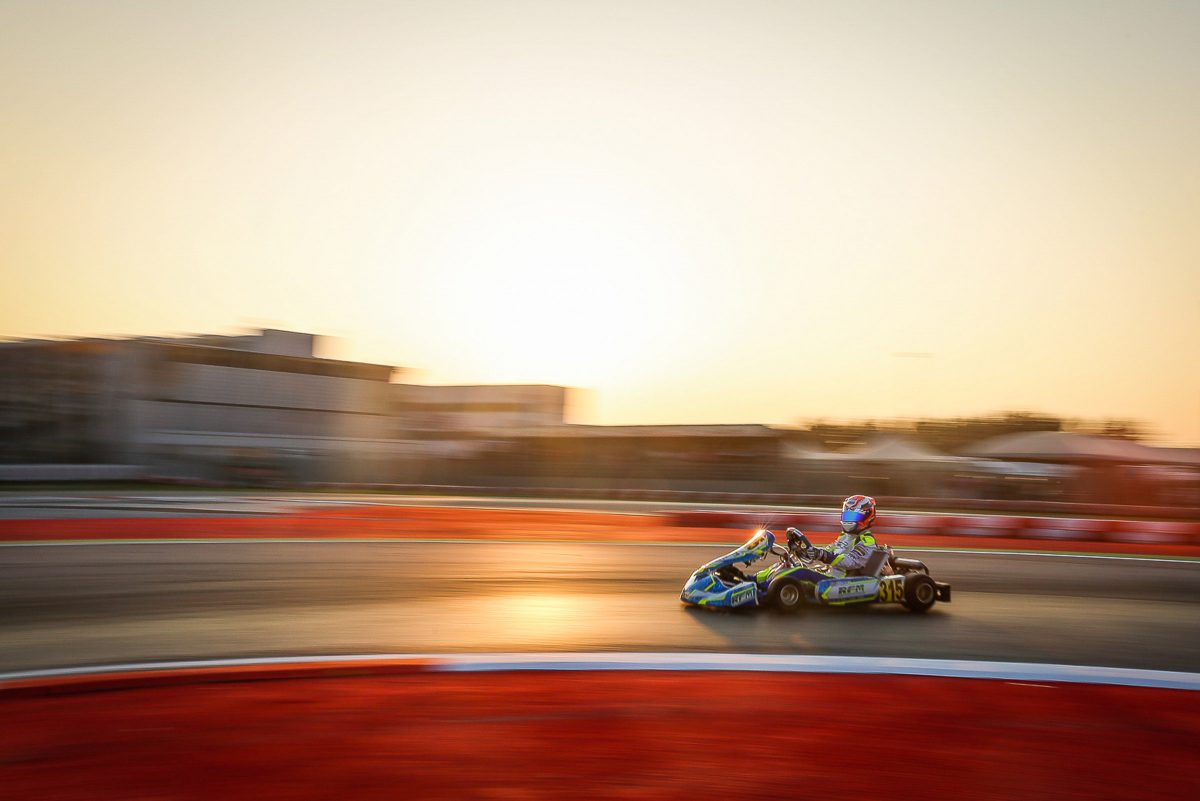 The WSK Final Cup is an annual “end of year” series which traditionally plays host to a mixture of drivers new to the OK Junior / OK (Senior) categories as well as those more experienced who have raced the category all year.  The Final Cup is made up of two or three race weekends with the winner crowned from points accumulated in each round.  For Kai it would be his second set of races in OK Junior with Ricky Flynn Motorsport following the Trofeo delle Industrie and his first time at Adria Karting Raceway which would be the venue for both rounds.

The 74 OK Junior drivers were randomly divided into three qualifying groups to go out on the track with 24/25 other drivers to set their fastest time in the 10 minute qualifying session. Kai struggled in the short 5 minutes given to set a very fast time (the team sending drivers out late to preserve tyres). He qualified 12th in his group which was only good enough for 35th overall.  Divided into five groups (A to E) all drivers would race against each other in four of ten total heat races. 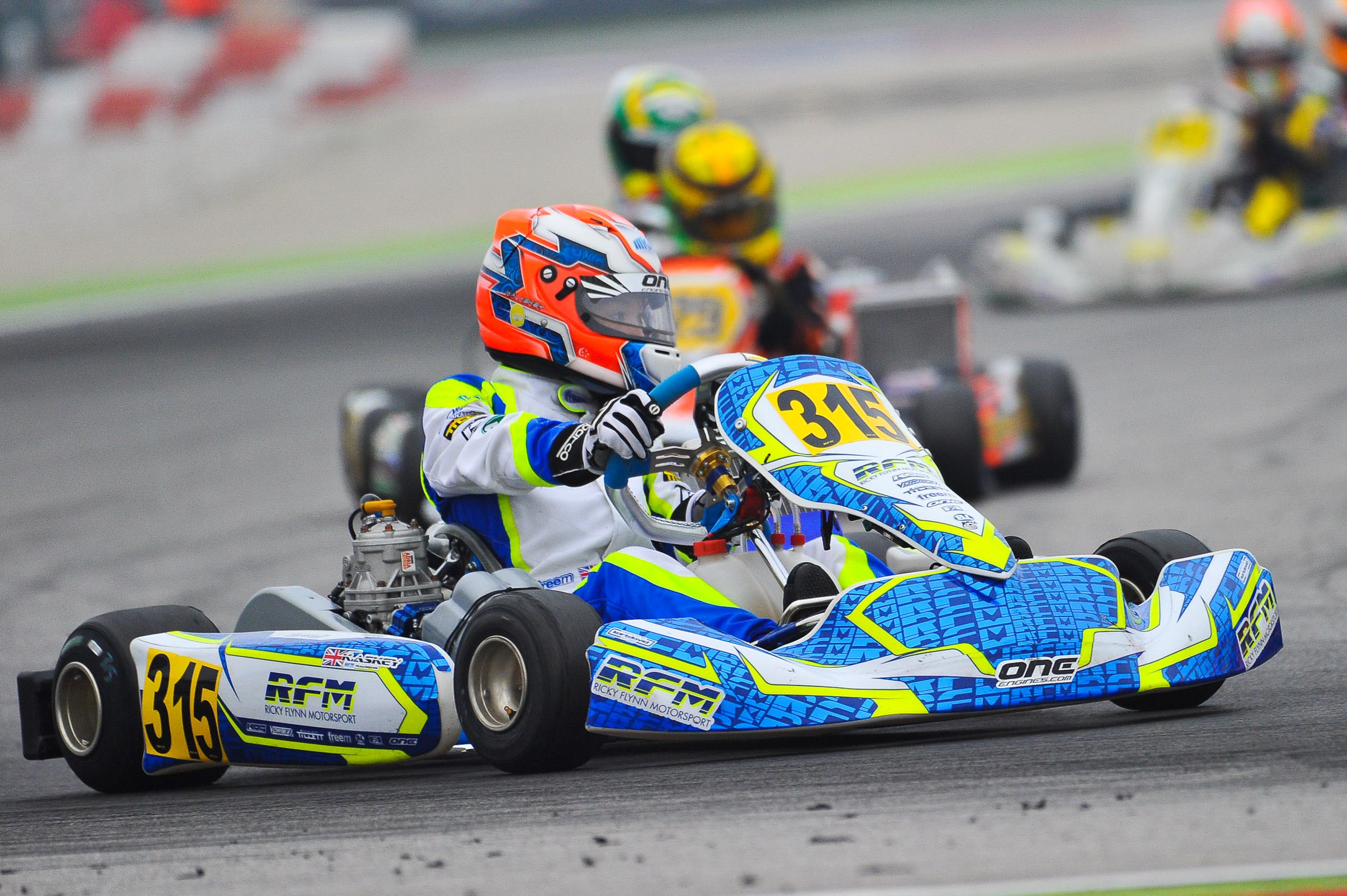 His 35th place overall would put Kai 14th on the grid for his four heat races.  He struggled to make up much ground in his first two heats finishing 13th and 15th respectively.  However it was shortly after the second heat that when analysing telemetry from the kart an issue with his race engine was discovered and the team switched him to his backup engine.  The engine changed helped and Kai was able to make up some places in his final two heats finishing 12th and 10th (also setting the second fastest lap of the race).

Out of the 74 drivers Kai’s heat results placed him 30th on 50 points.  The drivers are split into two groups for two pre-finals A and B, Kai would start pre-final B in 15th place.  The cut-off to make it to the final is to finish in your the pre-final 17th or above (only 34 drivers in total go through). 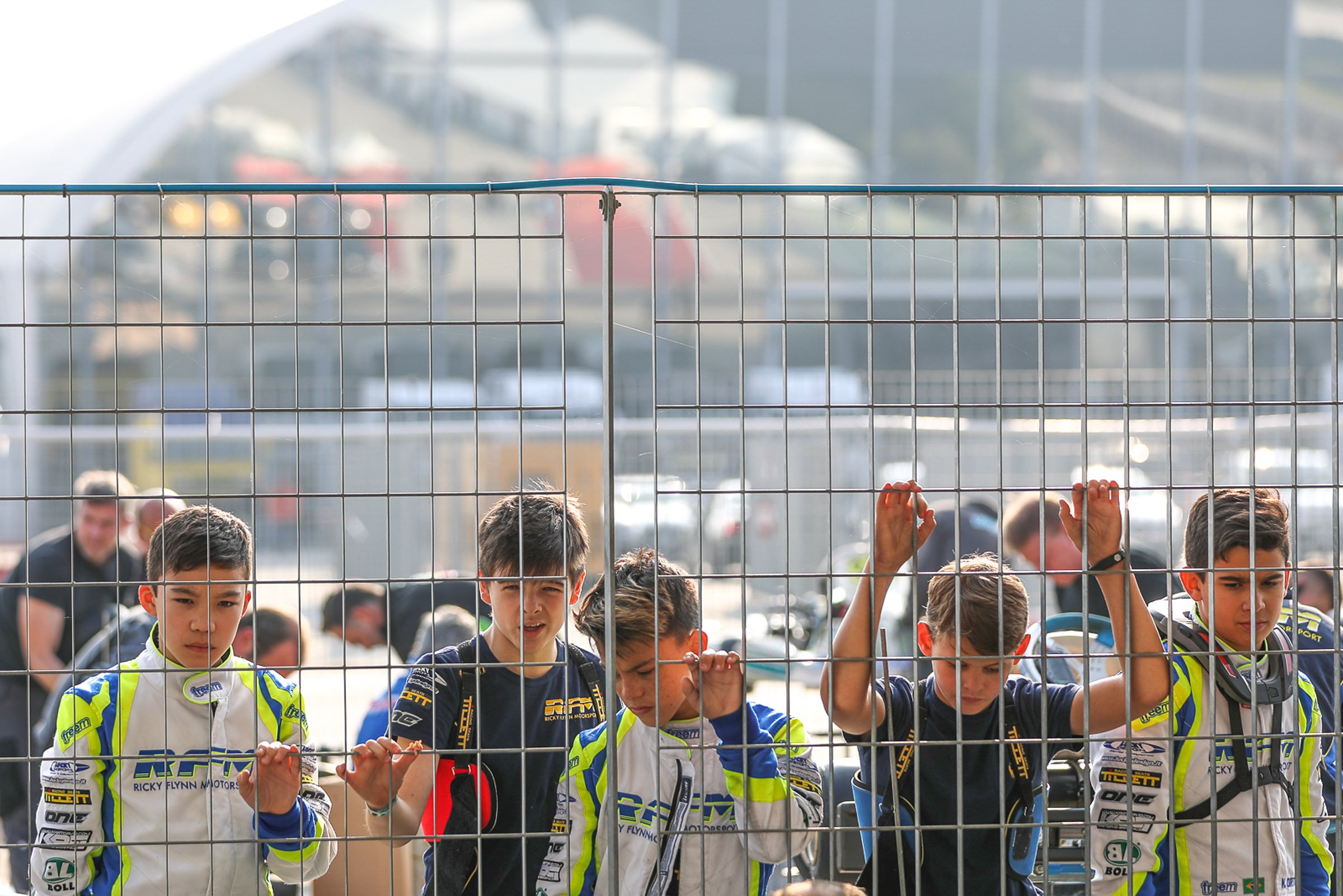 During the formation lap for the start of the race the driver in front of Kai was out of position, he drove down the outside of the grid and barged his way back in to place in front of Kai.  Little did we know (although he knew) at the time but this had dislodged Kai’s nosecone which is an instant 10 second penalty. The start didn’t go well either with the two columns of karts out of alignment meaning Kai started the race in 18th place and was shown as 21st place on the first lap.

Fighting hard to survive the pre-final and make it to the final Kai drove as hard as he could making up five more places to finish 16th but as soon as the race was over we found out his nosecone was dislodged and he would face a penalty. Sadly this 10 second penalty pushed Kai down to 22nd place and out of contention for the final.  A very tough and disappointing end to a long four days which hadn’t gone at all to plan and a reminder that in motorsports so many factors come in to play over which you have little or no control. 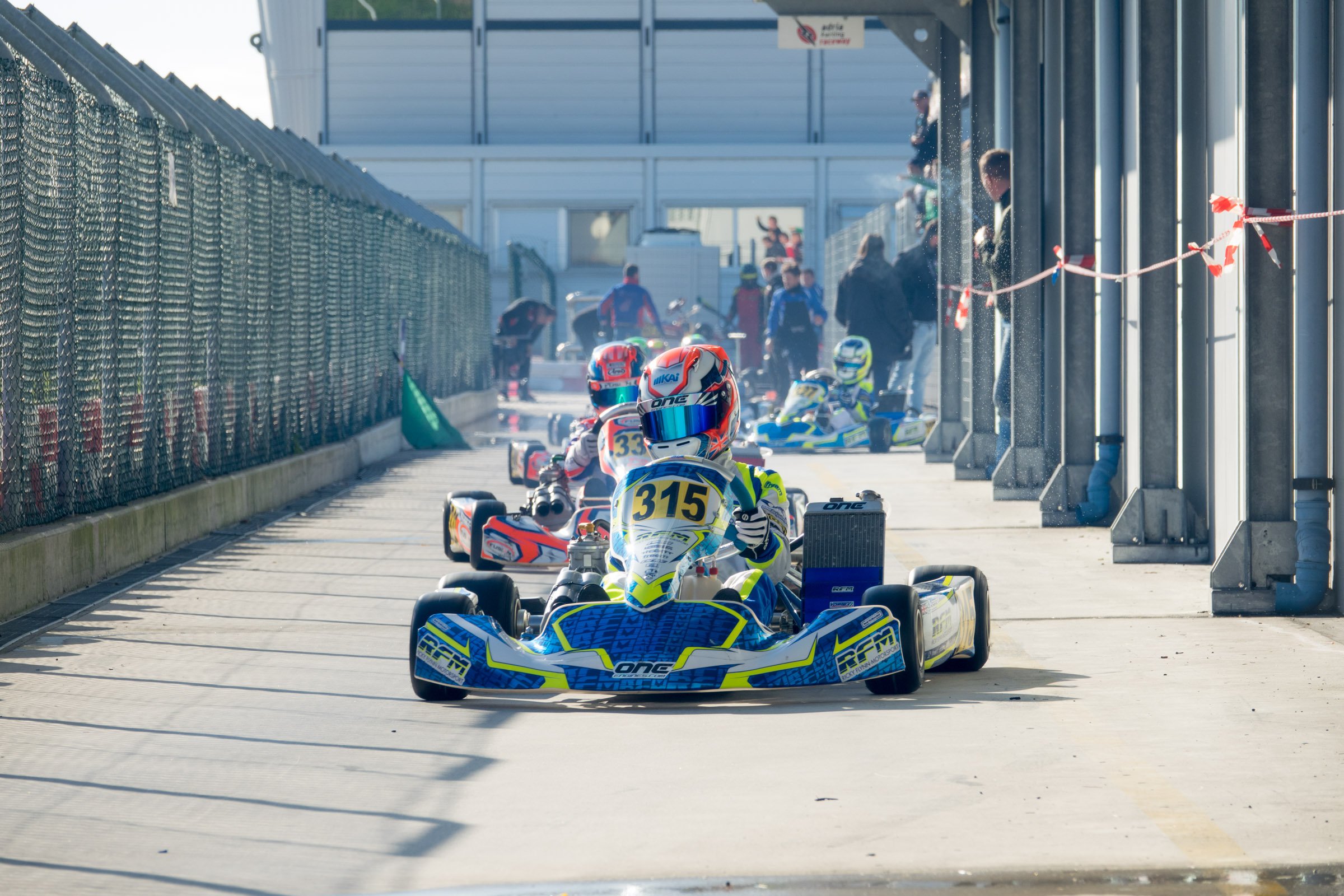 Using the standard WSK format the 60 drivers were randomly divided into three qualifying groups to go out on the track with 20 other drivers to set their fastest time in the 10 minute qualifying session. As per the previous week the team chose to send drivers out only in the last 5 minutes to preserve the tyres which would also be used for all heat races. Kai qualified 6th in his group which when the three groups were merged back together placed him 17th overall, a considerable improvement over 35th the previous week.  Divided into five groups (A to E) all drivers would race against each other in four of ten total heat races. 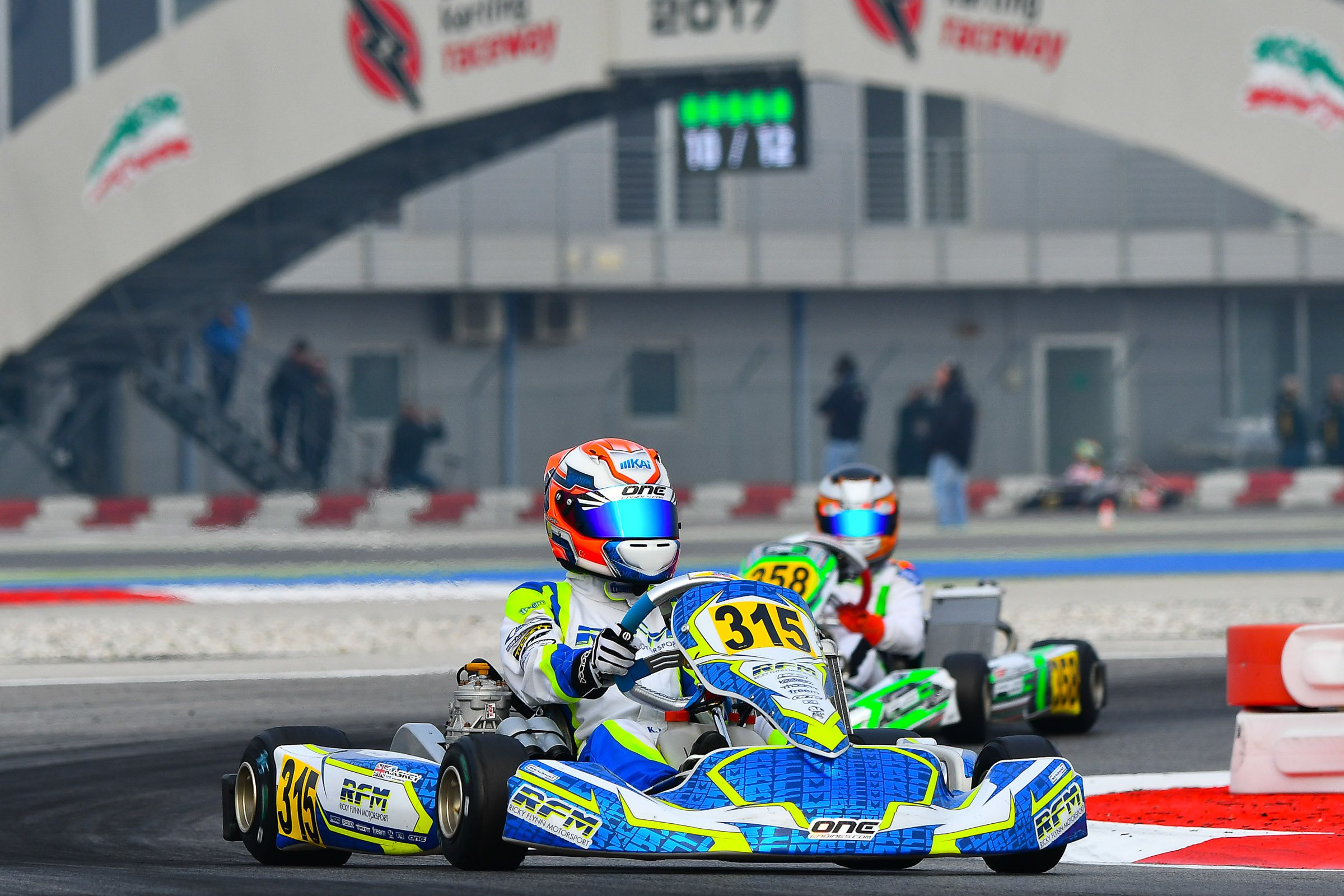 Kai’s 14th qualifying position would place him 7th or 8th in his four heat races. In the first heat which took place on the Friday night Kai started 7th and finished 6th. On Saturday morning the second heat didn’t go quite so well when he had a coming together with another driver on the first lap, going off the track and rejoining in 22nd place. Kai fought hard to make up 9 places to salvage some valuable points finishing 13th. The next two heats were impressive drives finishing 5th (his best result to date in a WSK race) and 7th. These four heat race results gave Kai a combined points total of 31 placing him 14th overall (of the 60 drivers).

The drivers are then split into two groups for two pre-finals A and B, Kai would start pre-final B in 7th place. The cut-off to make it to the final is to finish in your the pre-final 17th or above (only 34 drivers in total go through). 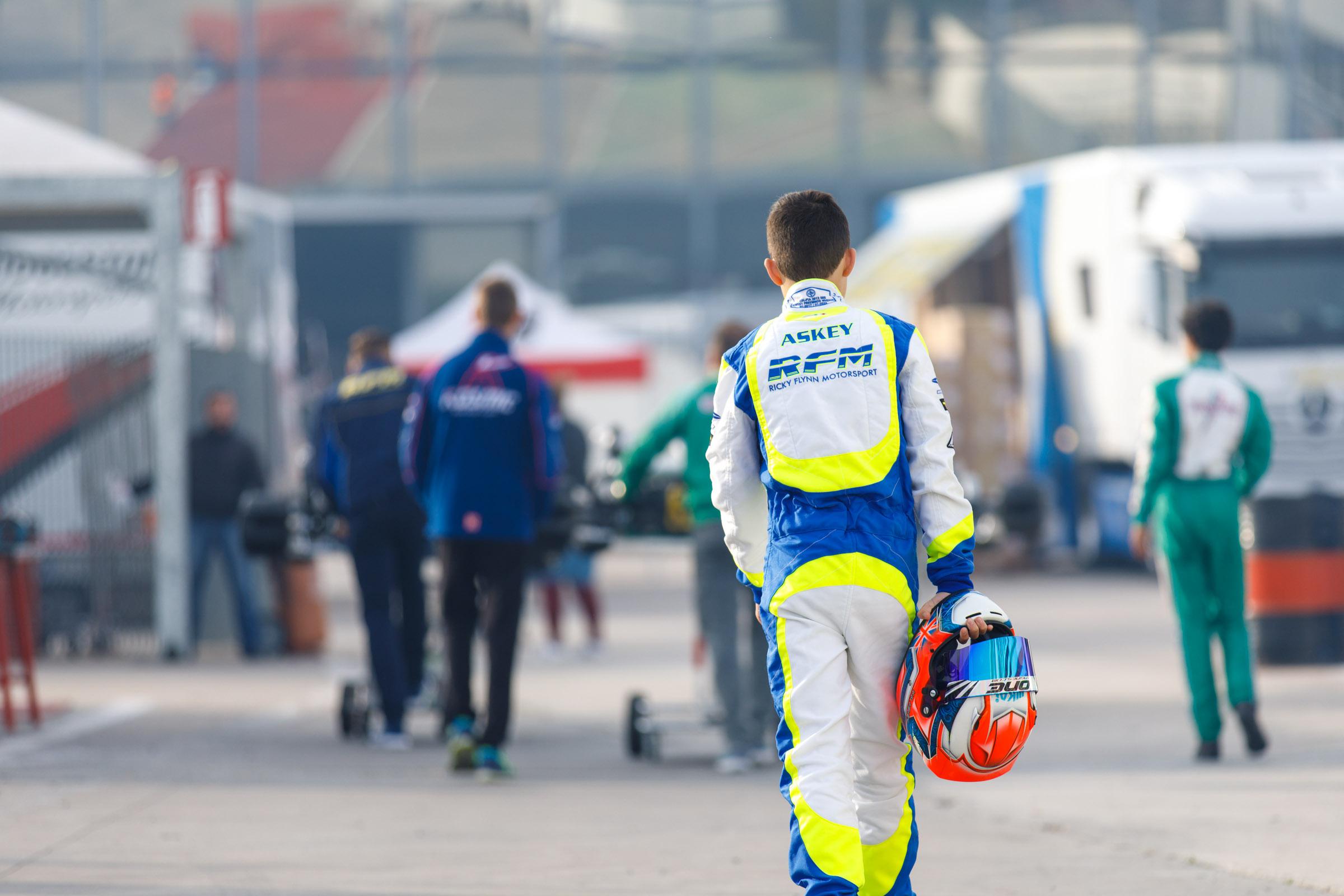 On Sunday morning Kai was in good spirits and in the warm-up session posted the 5th fastest time just 0.184 sec off the best. The pre-final started well enough Kai lost a couple of places but was making progress to catching back to the lead pack when another driver went for an overtake move which was “ambitious” to say the least, he hit Kai pushing him off the track and knocking Kai’s nosecone in (an instant and un-appealable 10 second penalty for Kai).   [click here for a video clip]

Kai continued to drive as well as he could even though his nosecone was partially jammed under the front of the kart making it extremely difficult to steer in slower corners. Despite crossing the line in 14th place the 10 second penalty pushed him to 20th meaning he wouldn’t qualify for the final. The driver who caused Kai’s accident caused another at the end of the race which saw him and three other karts crash out.

The WSK Final Cup ended being two tough weekends for Kai at Adria but with many positives, he was very fast on a track and learned a lot about the style of racing in Europe.  Motorsport is often described as one of the hardest with many factors out of the control of the driver, these two weekends are testament to that but Kai has shown great spirit and has achieved and learned a huge amount in his first three OK-Junior races.  It’s also important to remember he’s the youngest in the OK-Junior category with the majority of other drivers having done at least a year of racing in the category and on these tracks.